Prince overdosed on a powerful painkiller that federal health authorities say is a public health threat. One addiction specialist calls it “heroin on steroids.”

The pop star died of a self-administered accidental overdose of fentanyl, according to the Midwest Medical Examiner’s Office in Minnesota. Fentanyl is a synthetic opioid that is between 50 to 100 times more potent than morphine, according to the Centers for Disease Control and Prevention.

How Prince obtained the prescription painkiller is not known. His April 21 death at age 57 in his Minneapolis-area compound remains under investigation by the Carver County Sheriff’s Office, which had no comment Thursday. 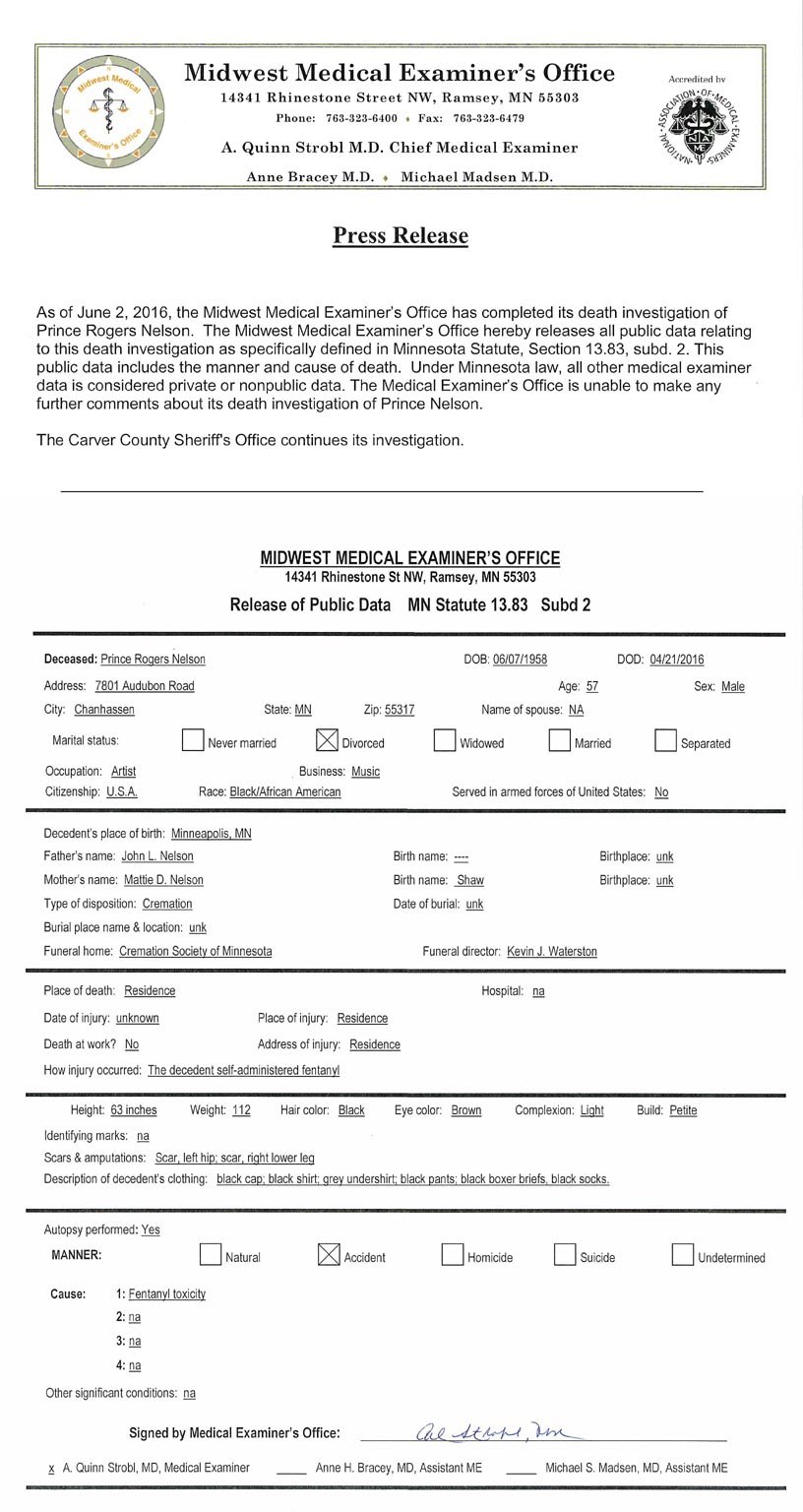 Fentanyl was first introduced under the name Sublimaze in the 1960s, and was initially administered via an intravenous anesthetic. Nowadays, patients can get a fentanyl dosage via tablets, patches, and injections — or even lozenges referred to as “lollipops.”

The drug is often prescribed for patients dealing with chronic pain from late-stage cancer, and is also used as an anesthetic during heart surgery.

“Think of fentanyl as legal heroin on steroids,” said Dr. Cali Estes, a private addiction coach. “The way most people describe [the high is like] lying in a bed of roses, having sex and eating a cheeseburger at the same time.”

Doctors have to undergo special training required by the Food and Drug Administration in order to prescribe it, said Dr. Matt Torrington, addiction medicine research physician who has worked at the UCLA Integrated Substance Abuse Programs. “One reason it’s so good is that it’s incredibly powerful in small doses,” he said.

In media interviews, close associates of Prince have said the performer was constantly in pain from years of athletic performances on stage. Just before he died, efforts had been initiated to get him into an addiction rehabilitation program.

Prince’s cause of death arguably makes him the opioid abuse epidemic’s most famous victim, along with actor Philip Seymour Hoffman, who died in February 2014 after overdosing on heroin and other drugs.

“We need to see the Prince in all of us. We need to see the vulnerability. We’re all vulnerable here,” explained Dr. David Kessler, a former commissioner of the Food and Drug Administration. “It’s a wake-up call for how we view these drugs.”

Because of its heroin-like effect, fentanyl has recently become one of the most popular illicit street drugs. In a March 2015 nationwide alert, the Drug Enforcement Administration identified fentanyl as a public health threat after more than 700 fentanyl-related overdose deaths were reported between late 2013 and throughout 2014.

In 2014 alone, the National Forensic Laboratory Information System found there were 1,245 fentanyl drug seizures in Ohio alone; Minnesota was not among the top 10 states with the most seizures.

“It’s become especially popular in the last six months,” Estes said. “On the black market, fentanyl is cheaper than heroin.”

Kessler said it’s a mistake to separate people using opioids legally from those who are getting them illegally. People start, he said, because they are told the drugs are going to help, but often aren’t advised about the long-term consequences of addiction.

“The most important thing is not to look at this through a lens of ‘This is bad behavior,’” Kessler said. “We all are susceptible to these medications.”

Questions remain as to how Prince got his drugs. According to an affidavit for a search warrant obtained by the Los Angeles Times, Prince saw a Minneapolis-area doctor, Michael Todd Schulenberg, the day before he died, and Schulenberg was at Prince’s Paisley Park compound to deliver medical test results on the morning the musician was found dead.

The doctor, who specializes in family medicine, had also seen Prince earlier in the month, on April 7, and told investigators he had prescribed medication. The singer was supposed to fill the prescription at Walgreens, although it is unclear from the warrant whether he did.

Prince’s health appeared to be a concern in the days leading up to this death. Attorney William Mauzy told reporters that his client Dr. Howard Kornfeld was contacted by Prince’s representatives, who were seeking help, the day before the singer died. Kornfeld specializes in addiction treatment and runs Recovery Without Walls in Mill Valley, Calif.

Mauzy said that Kornfeld couldn’t clear his schedule and instead had sent his son Andrew Kornfeld to Paisley Park in his place with a small amount of buprenorphine, a drug used in opioid addiction treatment. Andrew Kornfeld had flown to Minneapolis in hopes of encouraging Prince to check himself into the Mill Valley rehabilitation program and that the buprenorphine he was carrying was intended to be turned over to a Minneapolis physician to be administered to the pop star. According to Mauzy, the medication was not administered and was later taken into possession by sheriff’s investigators.

We need to see the Prince in all of us. We need to see the vulnerability. We’re all vulnerable here. It’s a wake-up call for how we view these drugs.— Dr. David Kessler, a former commissioner of the Food and Drug Administration

Dr. Kornfeld and his son declined to be interviewed.

According to authorities, Prince was last seen alive at 8